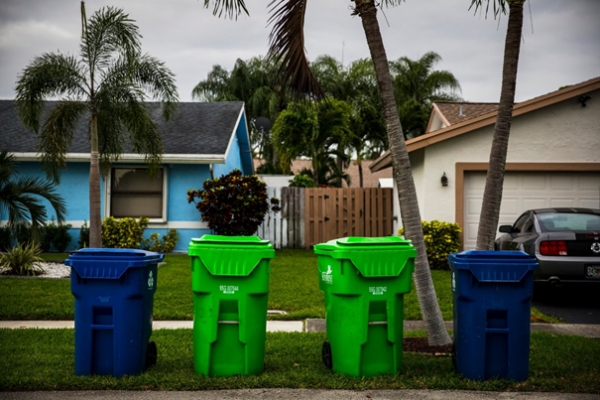 With China no longer accepting used plastic and paper, communities are facing steep collection bills, forcing them to end their programs or burn or bury more waste.

Recycling, for decades an almost reflexive effort by American households and businesses to reduce waste and help the environment, is collapsing in many parts of the country.

Philadelphia is now burning about half of its 1.5 million residents’ recycling material in an incinerator that converts waste to energy. In Memphis, the international airport still has recycling bins around the terminals, but every collected can, bottle and newspaper is sent to a landfill. And last month, officials in the central Florida city of Deltona faced the reality that, despite their best efforts to recycle, their curbside program was not working and suspended it.

Those are just three of the hundreds of towns and cities across the country that have canceled recycling programs, limited the types of material they accepted or agreed to huge price increases.

“We are in a crisis moment in the recycling movement right now,” said Fiona Ma, the treasurer of California, where recycling costs have increased in some cities.

Prompting this nationwide reckoning is China, which until January 2018 had been a big buyer of recyclable material collected in the United States. That stopped when Chinese officials determined that too much trash was mixed in with recyclable materials like cardboard and certain plastics. After that, Thailand and India started to accept more imported scrap, but even they are imposing new restrictions.

The turmoil in the global scrap markets began affecting American communities last year, and the problems have only deepened.

With fewer buyers, recycling companies are recouping their lost profits by charging cities more, in some cases four times what they charged last year.

Amid the soaring costs, cities and towns are making hard choices about whether to raise taxes, cut other municipal services or abandon an effort that took hold during the environmental movement of the 1970s.

“Recycling has been dysfunctional for a long time,” said Mitch Hedlund, executive director of Recycle Across America, a nonprofit organization that pushes for more standardized labels on recycling bins to help people better sort material. “But not many people really noticed when China was our dumping ground.”

Perhaps counterintuitively, the big winners appear to be the nation’s largest recyclers, like Waste Management and Republic Services, which are also large trash collectors and landfill owners.

Recycling had been one of the least lucrative parts of their business, trailing hauling and landfills. Analysts say many waste companies had historically viewed recycling as a “loss leader,” offering the service largely to win over a municipality’s garbage business.

That equation is starting to change. While there remains a viable market in the United States for scrap like soda bottles and cardboard, it is not large enough to soak up all of the plastics and paper that Americans try to recycle. The recycling companies say they cannot depend on selling used plastic and paper at prices that cover their processing costs, so they are asking municipalities to pay significantly more for their recycling services. Some companies are also charging customers additional “contamination” fees for recycled material that is mixed in with trash.

Most of the industry’s landfill increases were driven by economic growth: The more Americans consume, the more garbage they generate. But at least some of the higher volume were recyclables that could not be sold and repurposed, analysts say.

Some municipal leaders say they are growing wary of companies that control virtually every aspect of the waste and recycling system.

“Are these contamination rates truly high, or is it about benefiting their corporate interest?” asked Mike Ryan, the mayor of Sunrise, Fla. “We can’t afford to have inspectors constantly looking over their shoulders.”

Unable to afford the higher costs, Sunrise decided to burn its recycling in a facility that turns waste into energy rather than send it to a landfill.

“It’s not what most people think of as recycling, but it is better than the alternative,” Mr. Ryan said.

For cities like Philadelphia, recycling had long been a point of pride. Over the last decade, Philadelphia went from having one of the lowest recycling rates among big cities to one of the best.

When China was buying cardboard and plastics, recycling made money for the city some years. But last year, Philadelphia was hit with an “outrageously high” price increase, a city spokeswoman said in a statement.

The city came up with what it says will be a temporary solution. It identified the neighborhoods with the most contamination in its recycling bins and started sending their material to an incinerator in nearby Chester, Pa. The rest still send their material to a recycling facility.

The incinerator converts the waste to energy, which can be sold back to the electrical grid, said Carlton Williams, Philadelphia’s streets commissioner. But that has done little to alleviate many residents’ environmental angst and concerns about increased air pollution in Chester.

“Residents say, ‘You are taking all our recycling efforts, and you are burning it?’” Mr. Williams said. “They hear the word ‘burn’ and they think it is an environmental disaster.”

City officials are working to negotiate a more affordable contract that would restore recycling to all of Philadelphia this year.

In Deltona, higher costs were not the only factor behind the decision last month to stop recycling. Even if the city agreed to pay the additional $25,000 a month that its recycling company was charging, there was no assurance that all the plastic containers and junk mail would be turned into something new, Mayor Heidi Herzberg said.

“We all did recycling because it was easy, but the reality is that not much was actually being recycled,” Mr. Herzberg said.

The troubles with recycling have amplified calls for limiting waste at its source. Measures like banning plastic bags and straws, long pushed by environmental groups, are gaining traction more widely.

This month, a lobbying group for Connecticut municipalities, citing the chaos in local recycling programs, urged the governor to focus on restricting plastic bags, straws and packaging.

“The sooner we accept the economic impracticality of recycling, the sooner we can make serious progress on addressing the plastic pollution problem,” said Jan Dell, an engineer who leads Last Beach Cleanup. It’s an advocacy group that works with investors and nonprofits to reduce plastic pollution.

Some large waste producers are still going through the motions of recycling, no matter how futile.

Across Memphis, large commercial enterprises have had to stop recycling for now because of contamination problems. But the airport is keeping its recycling bins in place to preserve “the culture” of recycling among passengers and employees, a spokesman said.

“We want to ensure that we are able to have a seamless transition if and when single-stream recycling returns to the Memphis area,” the spokesman, Glen Thomas, said in an email.

Michael Corkery is a business reporter who covers the retail industry and its impact on consumers, workers and the economy. He joined The Times in 2014 and was previously a reporter at the Wall Street Journal and the Providence Journal. @mcorkery5